Exploring Phuket at Night: Best Things To Do in the Island as Soon as the Sun Sets

More than just the sparkling blue seas, fine sand, warm sun, and exciting water adventures, Phuket is also famous for its wide variety of fun activities and sights. Aside from spending time at the beach, there are many shopping, dining, and entertainment options to explore in this well-known tropical destination.

Daytime experiences on the island are boundless, but the nights are just as wondrous and spectacular. Of course, when talking about nightlife in Phuket, the first things that come to mind are bars, beers, and beats. But beyond the disco balls and endless parties, here are the nightlife adventures one should not miss in Phuket.

Revel in awe-inspiring lights and sounds, and learn more about the Thai people’s vibrant culture, traditions, and heritage. Some of the most renowned in Phuket are the entertainment productions at Phuket FantaSea, a 30-acre nighttime entertainment and cultural theme park. Phuket FantaSea’s Viva Bangkok is a unique theater show inspired by the hustle and bustle of Thailand’s capital. Meanwhile, Iyara Spectacular is a music, dance, and fireworks show set on an enchanted fairy tale trope.

Siam Niramit, on the other hand, is a world-class production known for “A Journey to the Enchanted Kingdom of Siam,” one of the most significant stage productions in the world with a hundred performers and over 500 costumes.

With its exuberant and luxurious nighttime shows, Simon Cabaret Phuket Showcases a display of originality, uniqueness, and laughter. It has attracted global visitors since its inception in 1991and has remained one of the leading shows in Southeast Asia to date.

Shop the Night Away

Night shopping is one of the favorite nighttime activities in Phuket, with buzzing shopping centers spread throughout the island’s top tourist areas. Shoppers can easily score awesome deals, unique finds, and tasty snacks in Phuket’s night markets with so many options available.

Phuket Town has several night markets spread across various areas on the island’s southeast side. One of the most famous night markets here is the Phuket Sunday Walking Street Market. Also called “Lard Yai” by the locals, this 300-meter long shopping district along Thalang Road is one of the place’s most popular attractions. It features a vibrant and creative collection of shops that livens up the historical part of the town. This market is open on Sundays from 5 pm to 9 pm.

On other days, those visiting Phuket Town may also visit the Chillva Market, which is open Thursdays to Saturdays from 5 pm to 11 pm. Characterized by the trend of repurposing old container trucks, it is a famous spot for young travelers and locals alike. Other famous night markets in Phuket Town are Naka Market (Saturdays to Sundays, 4 pm to 9 pm), Kor Jaan Market (Fridays), and Phuket Indy Market (Wednesdays to Fridays, 4 pm to 10 pm).

Phuket’s west coast also has a variety of well-known night markets. One of the most popular is Bangtao Beach‘s Fun Friday Avenue Market, a small but lively weekend night market that opens every Friday from 5 pm to 10 pm along Boat Avenue. Patong Beach also has shopping districts open daily: the OTOP Night Market and Malin Plaza (open 2 pm to 12 am).

A world-renowned sport takes centerstage in Phuket. Muay Thai, also known as Thai Boxing, is a cultural close-combat martial art considered the national sport of Thailand. It utilizes points of contact to mimic weapons of war, focusing on the usage of the hands, shins, forearms, elbows, legs, and knees.

When in Phuket, make sure to get the chance to experience the thrill and admire the sportsmanship and camaraderie of international Muay Thai fighters from countries like Thailand, Japan, Turkey, Australia, the United States, Argentina, Brazil, France, Canada, and Germany. Watch in awe as they battle in Bangla Boxing Stadium, the biggest stadium in Phuket, located in Patong, on the island’s western coast.

Indulge in a Posh Beach Club

Take nights out up a notch by hitting up one of the top beach clubs on the island. The west coast of Phuket is widely-known as a bustling party district, which is not surprising considering the vast array of bars and beach clubs in the area. Beach clubs elevate the party experience in Phuket by combining the tropical beach vibe with understated luxury and fun. Some of the most popular beach clubs on the island can be found on this side of Phuket, lining the beachfront of some of the most well-known west coast beaches such as Bangtao, Kamala, and Patong.

One of the pioneers in Phuket is Catch Beach Club, located along Bangtao Beach. This iconic establishment stood the test of time and is popular among expats. For those with children, there is a kid’s club with a playground next door to keep the little ones entertained while the adults also play.

On the other hand, Pine Beach Club is one of the newest beach clubs in Phuket, the third one along Kamala Beach. It features direct beach access and is known for its mouth-watering selection of food and drinks, after-sunset DJ sessions, and beach fire shows.

Go From Sunset and Beyond at a Rooftop Bar

The magnificent colors of dusk as seen from atop Baba Nest at Sri Panwa Phuket. Photo: Baba’s Nest

Enjoy a relaxed atmosphere, soak in the breathtaking sunset views, and indulge in the finest cocktails and bar chows in one of the famous rooftop bars in Phuket. Many options are waiting for those who prefer a more laid-back, equally as memorable nighttime rendezvous.

Offering one of the most exclusive rooftop bar experiences in Phuket is Baba Nest at Sri Panwa Phuket Luxury Pool Villa Hotel on the island’s southeastern tip. It can get quite hard to reach the place and book a table – there is usually a two-week waiting list – but the exemplary service, luxurious offerings, and spectacular Panwa Bay sunset view make your effort worth it.

On the other side, on the Southwest end of Phuket, lies The Sundeck, one of the area’s newest rooftop bars that offer breathtaking views of Kata Noi Beach and is a stone’s throw away from the famous Karon Viewpoint.

Heading north near Layan Beach, still on the west part of the island, is another famous rooftop bar, 360 at Phuket Pavilions. This hidden gem in the Phuket Pavilions exudes a warm, romantic vibe perfect for couples’ night outs and intimate gatherings.

However, suppose it’s privacy and solitude you desire when watching the sunsets. In that case, renting out Phuket villas with the perfect outdoor pavilion, rooftop lounge, or open balcony is what you ought to do. These villas offer stunning views and provide intimacy for you, your friends, or your family as you witness the sky turn colors before turning dark completely. You’ll also have the luxury of being served the best food prepared by the in-house private chef. 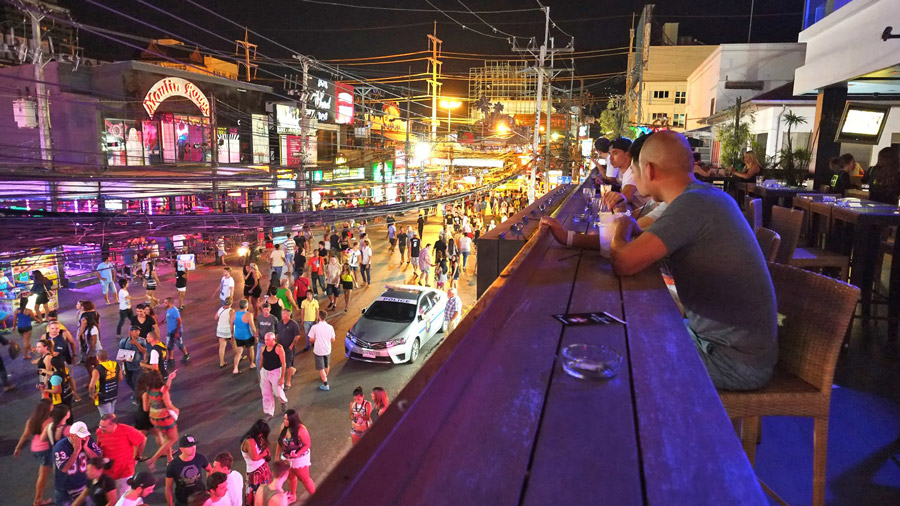 Bangla Road in Patong is where the fun starts as soon as the sunsets. A 400-meter stretch of road hosts several famous live music bars, nightclubs, and go-go bars for those looking for an exciting and fun night. Bangla Road is an entertainment epicenter divided into several side streets called Sois, packed with bars and clubs perfect for drinking and dancing the night away.

Some of the famous Sois along Bangla Road are Soi Sea Dragon, a spot for go-go bars with establishments such as Suzy Wong, The Devil’s Playground, and Harem A Go-Go. On the other hand, Soi Freedom is famous for its more relaxed vibe than its counterparts. Finally, Soi Tiger has action-packed bars, with Sharky’s Bar being one of the most well-known.

Visit the Phuket Travel Guide section of our magazine for more useful articles about the island.