Bali is brimming with natural wonders all around, but one of its most persuasive appeals has to be its legendary cultural heritage. Entrancing ancient dances, traditional puppet shows, famous painting techniques, and wood carving among others all substantiate this all-you-can-eat buffet of artistry. That said, here’s a look at some essential pillars of Balinese tradition that make for exciting pastime classes:

Wooden sculptures are a mainstay wherever you go in Bali. Beyond the famous rice paddies, lush greenery, and towering mountains, you’ll find wooden carvings of ancestral heroes, deities, and animals. Each statue holds tales of a compelling story, possibly hundreds of years old, and boasts a unique sculptural style depending on the tribe in question. The absence of these significant cultural artworks would undoubtedly take away the magical charm of Bali.

From temples to palaces, religious effigies and crafted architectural accents depict wooden art of some form, which was once only believed to have a spiritual inclination. That changed in 1920, though, as the European artists helped usher a change in mindset for the locals. Presently, wood carvings have superseded religious significance, and locals are now imploring them for recreational and commercial reasons.

The common materials for wood carvings typically include Baliwood, jackfruit, and teak, which artisans can quickly source from the local provisions. Bali’s humid and warm climate particularly favors wood carving, because it instigates a slow drying process that is perfect for extensive sculptural work.

WS Art Studio and Five Art Studio in Ubud, Bali’s center for traditional arts, offer wood carving classes that can be enjoyed by vacationers of all ages. Their skilled master carvers will guide you through the ancient art of wood carving, and teach you how to use traditional tools to create wooden masterpiece such as carved animals, masks or eggs.

You may also be interested to read Traditional Balinese Architecture As In Today’s Bali Luxury Villas.

North of Ubud lies the pristine village of Keliki, which holds the secrets of an iconic painting technique called the Keliki style. This artwork generally entails exceptionally detailed illustrations of everyday Balinese life. It also involves the use of bark paper and naturally-available dyes quite similar to those implored in cloths. The rich gradations and delicate depictions often require several hours of concentration and patience to execute flawlessly.

Aside from offering romanticized tales of rustic villages on the island and what the daily schedule encompasses, Keliki style paintings also capture the appeal of the plant life. More importantly, though, they also preserve interesting native folklore and Hindu myths that have been passed down across multiple generations. More specifically, painters often channel chapters encompassing the Ramayana and Mahabharata Hindu epics.

Modern painters have however diversified Balinese painting, bringing together the best of both past and present inspirations. Themes involving spiritual awakening have become commonplace, as have current age concepts subtly fighting modern advancement or machinery.

Of course, the best classes where one can learn this traditional technique are found in the artistic village of Keliki. I Wayan Ariana, one of the most respected Keliki painters of his generation, holds art classes at their very compound while Five Art Studio offers Keliki Painting Class where a skilled local artist guides you through the process of creating a beautiful work of art. The Keliki Painting School, on the other hand, offers a wider range of painting classes, with sessions tailored to beginners and vacationers who simply want to immerse themselves in Bali’s traditional art scene, to experienced artists that would like to practice this unique Balinese technique.

The roots of batik art reach back about two millenniums. It is a comprehensive dyeing technique that conjures intricate and alluring designs, harboring ancient stories behind eccentric hues and patterns. The creation process entails using dye-resistant wax on a blank backdrop, leaving behind unique combinations when the remaining region dyes to color.

Silk or cotton fabrics make up the canvas for batik art, which begins by stretching the cloth to make it firm before applying a design from a blend of resin and beeswax. The artist uses a pen-like instrument called the canting to spread a hot mixture of the ingredients after which he/she accents in-between the patterns with dyes.

Flowers, sea turtles, and stars are some of the most popular batik patterns. Image: Widya Batik Studio Facebook page

Batik attire traces back to the 12th century Kebaya dress among other ceremonial costumes worn to this date including wedding outfits. There are also batik baby slings infused with lucky symbols for the child’s well- being and select variations exclusive for royalty.

Those who want to explore this traditional art can visit Padang Tegal Kaja in Ubud and attend the batik art class of Nyoman Warta. He is a leading batik artist who shares his passion for his craft through individual or group classes where he teaches the basic techniques of batik art. Another artist offering authentic batik art classes is Widya Harsana, whose studio is located at Tegallantang, just about 2 kilometers away from Ubud Center.

Balinese dance traditions hinge a great deal on the Ramayana and Mahabharata Hindu epics. Performances typically involve finely crafted masks, dramatic costumes and are characteristically accompanied by a live gamelan orchestra, especially in religious settings. Kecak, Legong, and Barong prove to be the most popular styles of Balinese dance which has recently earned a spot on UNESCO’s Cultural World Heritage list.

The Legong alternative is only for young girls and entails intricate eye and finger movements, dynamic shifts in pace and direction, and expressive gestures. Barong, on the other hand, depicts the battle of good and evil. Rangda, the demon queen, takes on the role of an antagonist who seeks the destruction of the Kingdom with Barong, a dragon-like creature, standing in her way. 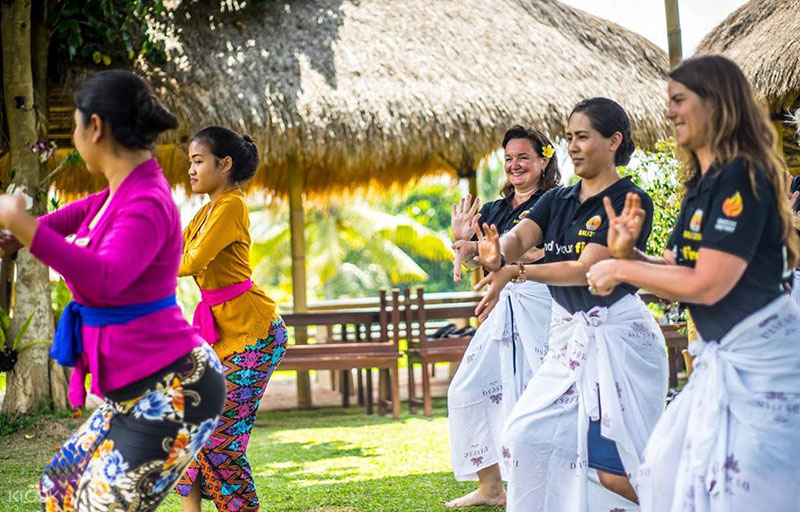 Lastly, the Kecak dance also offers a similar tale, pitting the evil King Ravana against the noble Prince Rama aided by Hanuman, a monkey god. This dance, which goes by the title Ramayana Monkey Chant as well, involves vivid arm thrusting and “chak” performances by over 150 people.

Learning how to perform their traditional dances is surely an exciting way to immerse yourself in Balinese culture. An ideal place where you can enjoy this activity is in the luxury resort of Desa Visesa which is also located in Ubud. The resort has expert dance instructors who will teach you basic dance steps, including the fluid finger movements that Balinese dances are known for.

Indian and Chinese traditions have had a significant say in the Balinese cuisine, which heavy hinges on Hindu culinary heritage. Balinese cooking is a little bit different from what you’ll find throughout Indonesia, with it entailing unique deity tribute dishes and other celebratory foods for festivals.

The most common ingredient is the staple grain of rice with steamed rice, in particular, frequently featuring across countless food varieties which heavily lean on vegetables and seafood. Beef and meat, in general, is rarely on the table, so to speak, courtesy of the Hindu religion which depicts one god (Bhoomi) who takes the appearance of a cow.

In terms of beverages, hot tea, and ‘Kopi Bali’ (Balinese coffee) are prevalent with condensed milk (susu) often accompanying the tea. There’s also a famous Balinese rice wine called ‘Brem’ that is as a result of fermenting ‘keta’ or glutinous rice which comes in either shade of black or white.

If you’re yearning to discover the culinary arts and secrets of Bali, the best way to do it is to attend a cooking class hosted by some of Bali’s top resorts and restaurants. Their classes are usually held by esteemed chefs and their skilled culinary team, and they have state-of-the-art facilities that one would expect from popular dining establishments. Some of the best places to learn how to cook Balinese cuisine are Bumbu Bali in Tanjung Benoa, Bali Asli in Karangasem, and Casa Luna in Ubud.

Check out our list of the 10 Best Restaurants In Bali.

Wayang Kuilt is a term that the natives coined for Indonesian shadow puppetry, with both words translating to ‘shadow’ and ‘leather’ respectively. Leather is the predominant puppet figure material hence the name.
Such a show has several purposes, including educating the masses on evil and good, teaching mortality lessons, and unraveling tales of God. Consequently, it often features on special occasions, including birthdays and anniversaries. This shadow puppet theatre is so enthralling that it even earned a nod from UNESCO in November 2003 when the body recognized it as an Intangible heritage practice. Wayang puppets are a product intricate of craftsmanship. Image: balicultureworkshop.com

The puppets can be made of paper these days and are usually two-dimensional. The puppeteers manipulate the objects via bamboo sticks from behind a muslin or white cotton screen with a light source casting the shadows against the canvas for vivid storytelling. Voice narrations accompany the presentation to bring out distinct characters while gamelan drums help set the tone of the scene.

The Bali Culture Workshop is a one-stop center of traditional Balinese arts and performances. Putra, their master puppeteer, is in charge of managing their shadow puppet theatre. He also runs puppet-making workshops where he will guide you through the step-by-step process of making your own puppet. This workshop usually lasts for one to two days, depending on your availability.

Bali’s cultural wealth is truly as wonderous as its natural beauty and trying out one of these fascinating art classes is only one way to experience this heritage. If you are staying at one of our luxury villas in Bali, our Guest Experience Service will be more than glad to make arrangements for you within the comforts of your villa.

Featured image courtesy of I Wayang Ariana on Instagram (@nanoeari_art)